The last few days have been fairly interesting.  This illness leaves a person fairly isolated from the world.

I am a very social introvert.  That means that I need a lot of time alone to recharge my body, mind and soul.  However, at the same time, I have a great need for socialization.  The tricky part is striking a healthy balance.  One of the ways I accomplish that is by going to for lunch many days and often going to a coffee shop late in the afternoon. I often take my laptop with me so I can get some work done and at the same time have some social interactions.

While camping in Custer, SD, I have tried to go out for lunch a few times.  Many of the restaurants are closed as they cater to the tourists from about May through September.  A few are still open.  I would look each one up on the internet and try to determine which ones might be safe.  In trying to visit them, in each case, I reacted to something in the restaurants.  Sometimes is was cleaning products.  Sometimes old cigarette smoke, and sometimes just because many of the buildings here were built in the late 1800s.

It can be a lonely existence.  Thank God for cell phones and Facebook.

I met Rob at the campground.  He is an ex-Marine who served in Desert Storm.  He has a lot of the same symptoms that I have from mold toxins.  However, his came from being hit with nerve gas during the invasion.  (I know.  The sources says that this never happened.  Having worked in the military complex in a prior life, I know that what we read in the news has nothing to do with what is really happening.)

As we shared stories, Rob was a great source of encouragement to me to keep going and keep trying.  His symptoms are gradually waning.  A long and slow process.

Earlier this week I went on a hike.  Yes, I did say a hike.  At home in Minnesota I can barely get in a few hundred steps each day.  In a high, dry climate like Wyoming or the Black Hills of South Dakota, I have to problem hiking.  I have had a couple of days where I walked 7,000 steps.  And on one day, I wasn’t even trying. 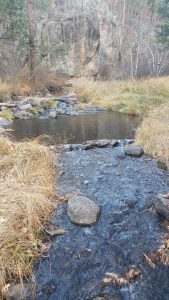 Hiking up a beautiful steam valley, I encountered a young man fishing.  Intending to ask him if there were any fish in the pool he was at, I soon noticed that he was unhooking a beautiful  14 inch rainbow trout.  He was fishing with a spinning rod and natural worms. 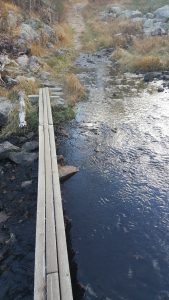 Now for a bit of back story.  I keep my fly rod in the Jeep because it breaks down into four sections and the case tucks away neatly.  My spinning rod takes up much more room.  (I am a lousy fly fisherman, but keep trying.  My favorite saying is that at least fly fishing gives me something to do while I am not catching fish.)  As I was getting ready to leave on this trip, my much smarter wife brought me the spinning rod case and said, “Don’t you want to take this with you?”  My answer was, “No, I probably won’t go fishing anyway and if so, I will use my fly rod.”

Back to the trail.  I hiked up the trail again to the pool/pond where there were certainly trout.  Rigged my fly rod with a flourescent green beaded nymph and a strike indicator.  First cast.  Strike!!! Set the hook.  Fish on the line. This is going to be easy. Brought it to shore.  It was four inches long. 🙁 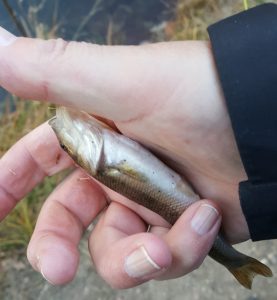 I spent a couple of hours fishing, changing flies, changing locations, changing depths.  I did catch one more fish, but it was smaller than the first one. 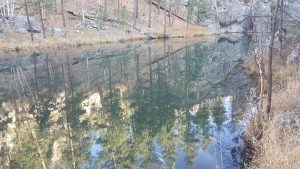 At least the setting was a nice place to not catch fish. 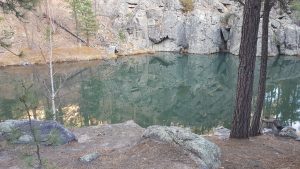 Kicking myself for not listening to my wife, I drove up to Cabelas to ponder.  Maybe I could rationalize buying another spinning rod and reel.  Maybe there would be an amazing sale.  After staring at the racks for probably an hour, I decided that spending another $150 on something I already had at home was a really silly idea.  Maybe I can figure out how to deliver a wriggling worm using a fly rod.

As I was outside cooking lunch the next day, bemoaning the fact that I couldn’t catch a fish, Rob (remember Rob) drives up and asked how my fishing went.  I showed him a picture of my “success.”  He said, “Do you want to try again today?”  Of course I said yes.

He drove off and reappeared a few minutes later with a spinning rod and reel.  He told me what lake to go to, what rock to stand on, gave me a spinning lure that is gold for him, told me how to rig some Powerbait and sent me on my way.

I am feeling so blessed by the kindness of strangers.  Although, when you open your heart and share your stories, I don’t think they are strangers anymore.

With newfound hope, I headed to the lake he suggested, found the park bench he mentioned, stood on the rock he suggested, cast the lure and started reeling in trout.  Amazing!  They weren’t huge, maybe 10 inches, but still a lot of fun. 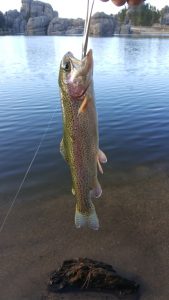 Speaking of strangers, there were a couple of gentlemen fishing next to me.  We struck up a conversation (did I mention that I was a social introvert?)  One had MS.  The other was crippled from multiple back fusions.  We made quite the trio.

They were pulling in some beautiful trout, 12-15 inches.  I saw that they were fishing with a rig that Rob had described.  I tried rigging mine up that way with little success.  After a few tries, one of them came over, rigged my line for me, gave me some of his artificial salmon eggs.  Within minutes I was pulling in 12 inch rainbows.

Just as the other two gentlemen were getting put to leave, something hit my bait hard.  One a 5 foot ultralight rod, this was going to be fun.  After a few minutes, I nursed the fish up onto the shore.  It was a beautiful 15 inch full-bodied rainbow trout.  Life is complete. 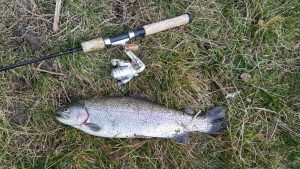 It was about an hour before sunset and the trout were starting to rise to eat surface insects.  What an opportunity to see if I can fly fish.  I wandered back to the Jeep to fetch my fly rod, tied on a dry fly and started casting.  About 10 minutes in I got a strike, set the hook and reeled in a 12 inch rainbow trout.  Ok, so at least I am not a total failure at fly fishing.

After a few more casts I manage to set my hook into the tall branches of a pine tree behind me.  It was starting to get dark, so I packed up my gear, grabbed the three fish that I kept and headed home to cook trout for dinner.

The setting was spectacular.  Another picture perfect day. 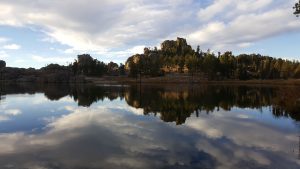 After cleaning fish in the dark, I cooked up one trout on the grill for dinner and froze the other two (including the big one) to take home and share with my wife and 16 year old son.  (His older brother will not eat fish.) 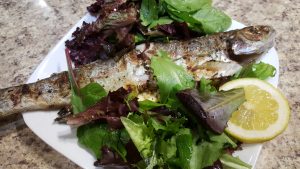 Finally, I fell into be with a full belly and a full heart, thankful to be blessed by the company of “strangers.”