I almost took the lazy way out for dinner tonight and picked up a rotisserie chicken at the market. However, I had a hunger for stuffed peppers and an herb garden bursting with fresh mint. What to do?

I found a recipe that fit the bill and modified it to our eating preferences. Lots of healthy macro-nutrients and bursting with flavor. Never would have considered putting a handful of mint in stuffed peppers, but it worked.

I like to cut the peppers in half length-wise and lay them on their sides.  They seem easier to fill and to eat.  You could also cut the tops off and stand them up on end.

Aleppo peppers are a recent find for me. They are from Turkey, have about half the heat of red pepper flakes and have a wonderfully mild heat. If you can’t find them in your local market, they are available on Amazon. 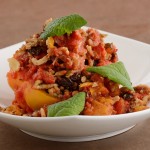